Today, China News Network, on the
18th, the second component of the PV module in the Sino-Sour, clean and transparent, a blue tooling staff shuttled between the two welding machines. In the past, a stringer required 2-3 workers. Now, in front of a fully automatic two-track high-speed stringer, only one worker is required to perform regular maintenance. Other work is given to the robot for program operation. This greatly reduces the fragmentation rate while improving accuracy. China Material Network PV M1, M2 two components workshop is the main "engine" of enterprise production, which determines the efficiency of production and the positioning of the market from the source. General Manager Liu of Zhongwu.com introduced that with the market orientation, the promotion of affordable Internet access and the implementation of the “Leader Plan”, the photovoltaic industry has put forward higher requirements for component conversion efficiency and production cost. The half-chip technology has become the first choice for component manufacturers due to its high power, low hot spot effect and the relative maturity of its technology and equipment. Double glass technology has higher weather resistance, load resistance, insulation performance, fire resistance, anti-PID performance, lower attenuation, longer life cycle, higher power generation, and market share. Upgrade.

The trend of the market is the direction of enterprise innovation reform and upgrading. Since the end of last year, Sino-Source has started technical transformation of two component workshops, effectively superimposing high-efficiency half-chip technology and double-glass component technology. The production line that previously only produced a single component was transformed to produce both half-piece and double-production. Glass's high-performance composite manufacturing line.

The M2 workshop has been remodeled, and the capacity of the single string welding machine has doubled, from 9 to 4 units. Standing in front of a modified machine, the M2 component workshop agent told the reporter, “There should be a quality inspector standing here.” When the original production, the quality inspector found that the problem would manually suspend the production line and take it. Next time. After the technical transformation is completed, the quality inspection is automatically completed by the machine, and the defective products are directly put into the waste box. During this process, the production line runs normally. In addition to the improvement of production efficiency, more important is the improvement of precision. Taking the main grid line on the wafer as an example, the original manual can only identify errors of up to 0.05 mm, and after intelligent production, the error can be controlled within the range of 0.005 mm. 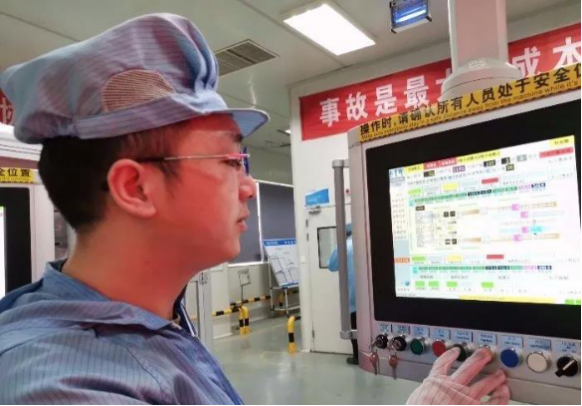 On March 18, 2019, the M1 workshop technical upgrading project was nearing completion and officially entered the whole line debugging and trial production stage. After the production, compared with the original workshop, the annual production capacity of the M1 workshop is increased by 150MW, the power of the polycrystalline module is increased to 280W, and the personnel will be streamlined by 30 people, reducing the production cost by 0.072 yuan/W, while the technical advantages are prominent. Manufacturing costs are greatly reduced.

At the same time, China Resources Network PV has reserved an upgrade window for next-generation component technology, actively promoted the improvement of industrial Internet platform and “smart + service”, and built “China Material Network Operation Management Platform” to realize intelligent control and BI real-time analysis in production process. The component workshop will be built into a high-performance composite intelligent manufacturing workshop with an annual output of 500MW half-chip components (compatible with conventional/double glass), which will promote the transformation of enterprises into “integrated suppliers of product services”.

The main products of Sino-Source are solar cells and components. They are dedicated to the research and development of photovoltaic technology, the manufacture and sale of photovoltaic products, and the design and implementation of photovoltaic systems.

The main products of Sino-Source are solar cells and components. They are dedicated to the research and development of photovoltaic technology, the manufacture and sale of photovoltaic products, and the design and implementation of photovoltaic systems. The comprehensive transformation of the M1 and M2 component workshops has also enabled Sino-Source to develop its market. General Liu introduced that the company's products were unveiled at the Japan exhibition. Many Japanese customers came to inquire and consulted, and they have already placed orders. "By September 1st last year, Europe canceled the 'double opposition' to China's photovoltaic industry, showing the right The willingness to invest in parity online is very strong, so in this respect, it will be of great help to our products going out."